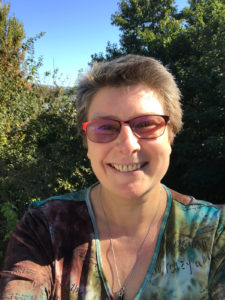 My Spiritual Journey began even before I recognized it as that, having a very Spiritual Mother from the Czech Republic who grew up in Spa Town before Hitler marched in, they were taught Yoga as part of the curriculum and she was an avid Rudolph Steiner fan too.

One of her favourite sayings was Tink Postitiv my Darlink! Well she did have a funny accent! The other one was ‘You chose me’! With a big grin on her lovely face as yet I learnt another lesson.  I dismissed it at the time but the more I awakened the more I understood.

Going down the conventional job route as many do, deeply unhappy, illness after illness, depression and finally what I refer to now as my breakthrough in my mid twenties. Two years off work and being told I had to wait 18 months to see a counselor led me to taking control of my own healing, started Tai Chi and read everything I could get my hands on and found amazing teachers through Louise Hay, Wayne Dyer, Victor Frankl, Erkhart Tolle, Kyle Cease, Matt Kahn and many many more.

I also used to take my mother to her Beloved Aetherius meets, taking part in Prayer Power and Pilgrimages around the UK.  The energy of collective prayer used to knock me out at first and re-align my body it is such a powerful energy.

Still down the conventional job for a few years after, but along side started Reiki Training, Meditation, selling crystals & taking part in local community Mind Body Spirit Fairs starting to build up my own light.

In 2008 I had the opportunity to open my own spiritual shop called Crystal Angels which I had for 7 years, with its retail side, classes, workshops it came as a bit of surprise when Guidance came through to close it after a one to one session with my own mentor David Ashworth (Davidashworth.guru) original Channel of the Emerald Heart Light.  It took a while to digest that my dream wasn’t actually for my highest good and I have learnt over the years that if you are doing something that is not for your highest good, the light will create change. I had stopped working on my own evolution so my own spiritual path had become stagnant and keeping myself small was not serving myself or others, I was not reaching as many people as I was meant to in the bigger scheme.

In April 2016 I started a 13 month course through the Emerald Heart school of enlightenment called the 13 moons of transformation involving taking an energetically programmed essence every new moon, the first three months being clearing and within days of starting the process to close my shop, sell my house and all my belongings had begun & by may 2017 all had gone and I traveled for a year on a spiritual quest of Yoga Retreats, temples and letting go

During this time I was in New Zealand for 5 months and it was then that I was Attuned to Divine Plan Healing which works with the Emerald Heart Light and the Love & wisdom of Mary Magdalene By Harriet Kroon in Amsterdam – The Divine Plan Healing School – the first three months of adjusting to the 5th dimensional frequency was a time of self healing and all in all my spiritual path has been accelerated somewhat!

After being Attuned to the second level of Divine Plan Healing in March 2019 this lead to the letting go of ingrained behaviors and beliefs, I embarked on my own healing journey delving into dark shadows which is sometimes necessary to emerge once again into the light.

Now in February 2021 I am once again ready to continue to work with the light and allow it to guide me.

A divine Plan Healing lasts 6 weeks I assist you in selecting your healing target whether it be emotional, physical, an event past present or future or spiritual, the light then opens up your heart and brings to awareness what needs to be healed.

Having been on the outskirts of the Emerald Heart Light for years it is a privilege and honour now to be part of this amazing frequency and to be able to share it with you all.

Look forward to working with whoever is attracted to the light and wish you many blessings on your paths.